My opinion right after watching film

My opinion right after watching the film is that it started and ended well. What I mean by that, is that……. the middle of the film drags and it is a bit of a bore. I like how they somewhat modernized it (I am not talking about the celebs), and I like that they did not make this too long (which I criticized the first movie of being), and it holds most of the integrity of Fantasia. The celebrities did not bother me as much as I thought it was going to be, but they do somewhat signify to me at least, that this was the start of the dreaded Post-Renaissance era, and they were doing too much to appeal to the public, and try to be modern.

Roy E Disney pitched the idea of a Fantasia sequel in the mid 70’s for it to only be shelved for the 1980s. It officially started development in 1990, with conductor James Levine, Roy Disney, Thomas Schumacher, and Peter Geld building this from the ground up. It was going to be released in the mid 1990s, but they pushed it back to 2000. It went under many names. First it was called Musicana, then Fantasia Continued, Fantasia 99, to finally Fantasia 2000. 2 shorts from Fantasia were  going to be in the film (like how Walt Disney intended it to be), but only the iconic Sorcerer’s Apprentice made the final cut.

So, I am just going to ignore the celebrity introductions, since they are not worth analyzing, but there were people like Steve Martin, Angela Landsbury, Pen and Teller, James Earl Jones, Better Midler, and more. 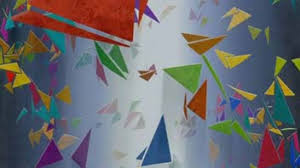 The first short is called Symphony no 5. It is about a bunch of light triangles (which I believe are supposed to represent butterflies) floating or flying around happily, until the dark triangles (which I think are bats) completely take over as the light triangles try to run away, but the dark ones almost kills and attacks all of the light triangles; causing attack wherever they touch. Because Light always prevails, all of the dark ones are defeated. I have to say that I found this one to be very enjoyable, and flows with the music very well. It captures the essence of the song really well.

I like Pines of Rome as well, though it is a bit too long for my liking. The music is very soft and smooth. This short is about a bunch of flying whales, and a little one reuniting with his mother I believe. What I also find a bit eerie about it is that the whales are very awkward to look at over a minute or 2. This is pretty good, but a bit boring to me.

Rhapsody in Blue has to be my favorite short in the entire film. I believe it is the longest one out of them all, but this one REALLY works well with the music. Whenever the music is at a fast beat, we get some extremely fast and action packed animation, and it does well with the slower movements. We see about 4 stories. One about a man working as a construction worker, another man who is struggling as he is broke, a little girl going through a normal day, and a man who has a bitchy wife who spends all of his money. All of their stories are concluded well, and it is really fun to see the extremely stylized animation move around.

The Piano Concerto no 2 is where I start to get bored of the film. This short is just not really engaging to me. It flows with the music well enough, but it is the typical guy who falls in love with a girl (who is being forced to be with the bad guy), saves the day, and gets the girl. It does not do the best job that a Fantasia short is supposed to do. I really like the animation, as it was supposed to look extremely glossy, as they are dolls.

The next short is called The Carnival of Animals Finale, and it is just so silly. The entire concept is what a flamingo would do with a yo-yo. What I will say is that it works well with the fast-pace of the track we are listening to. It just makes Fantasia seem a bit amateur and silly. It does get old fast, but I am glad that this short is…you know…..short.

I will copy what I said from my Fantasia review:

The next scene is The Sorcerer’s Apprentice, and with the amount that is hyped up by everyone, I thought it was mediocre. Don’t get me wrong, the animation is great (though lacks compares to the other ones), and it is one of the others that have a consistent plot. The apprentice Mickey is trying to do magic from the sorcerer’s book and cannot control it, and in the end, he has to learn patience……and…… I don’t really know. This scene did enough for me though.

While the Pomp and Circumstance scene does have the music that EVERY graduation plays, this is a very strong short. It is the story about Noah’s Ark and Donald (or Noah) has to build the arc, with Daisy wishing him good luck . When the arc is finished and they have to lave, both of the ducks enter at different times, thinking that the other has died, and they walk past one another so many times without even realizing it. When they sadly leave the boat, Daisy forgets the locket Donald gave her, which they both pick up and realize that they were always together, and they reunite before they leave. One of the best in this film.

The final short of the film is the Firebird Suite. The Spring Sprite is happy encouraging and helping the forest grow and bonds with an elk, but they accidentally awaken a Fire Spirit, who wrecks havoc among-st the forest, and almost kills the Spring Sprite. She barely makes it and her elf encourages her to restore the forest. It flows well with the music, and has really great animation (one of the best in the canon). The music is slow, but powerful.

I again cannot say anything about the characters in the film. Most of them I cannot even consider characters (as they are props, have no characterization, and do not speak), but the ones that are characters (Donald, Daisy, etc) were pretty good.

This film probably has the most variety of animation out of the canon. It would go from extremely detailed and stylized CGI to overly cartoony and 1940s traditional animation, and you could tell that Disney worked their asses off in the animation department, making this film almost an artistic orgasm. What I will say is that it is weird looking at the whales in Pines of Rome for too long.

When it opened on January 2000 (its premiere for critics was in 1999),  it was the first animated film to open in IMAX. It opened well enough, but during it’s 6 month run, it only managed to make $90 million in the box office. With an $80 million budget, and having to pay off the theaters, distribution, etc, you could say that it is a flop; which has not happened since The Rescuers Down Under, and only re-establishing that the Renaissance is over. It was a critical success, with many liking it for the same reasons they liked Fantasia, but they still think that this film does not hold up to the original film. It won 3 Annies for Storyboarding, Character Animation and Production design, also being nominated for a few other awards.