This is an issue that has been bothering me since the movie came out, and as I am speaking to you about this matter, I am also currently writing the Frozen review (yes, I am that far ahead), so it popped into my mind. For some reason, this pairing is the most popular shipping in the Frozen fandom, and it is very disturbing.

People can ship yaoi/yuri couples, and I have no issue or conflict with that, but the big issue about this couple is that THEY ARE SISTERS. That is a fact that CANNOT be ignored. We live in a world where incest is not only disgusting and illegal, but it completely immoral, and the thought of being with someone who you are family by blood with is just so creepy and mind-blowingly nauseating. It is actually very disturbing with the amount of people who are supporting incest, and I have heard many say in defense “there is nothing wrong with it, and we are being prejudice. Homosexuals were hated and looked down upon, but now they are accepted”, but homosexuality and incest are two completely different things that should not even be compared to one another, because liking someone who is the same gender is completely different than liking someone who came out of your relatives having sex one way or another, and are very close in the gene pool.  Just the thought of someone you love on a sibling or a cousin level, and you watched grow up being a part of the family, and then the entire….ugh.

The directors wanted to focus on something different, like family love, and a strained relationship between two family members, but with a bunch of people twisting that to fit their need for romantic love is completely slapping the film in the face, and ignoring what it is about to fit that perception. Apparently, the “way they look at one another and act is reminiscent of lovers and a couple.” HOW? WHY? WHAT? So because a sister wants to speak to her sister, and they have a natural relationship means that they want to shag one another? Not only is that ludicrous, but it is also a slap in the face to sibling relationships. Point blank, it is deluding something into something that it is not. I am trying are not to lose it, but…..I feel so nauseous as I write this.

I think that many animation fans feel the need to insert romance in very single aspect of a film, especially when there is little to no romance in a film, because face it; a lot of us are romantics. But inserting to these two as a romance? I…….I can’t respect it, as it literally makes no sense, and nothing can convince me otherwise. There is literally no rational reason as to why this pairing makes any sense or is a good idea. 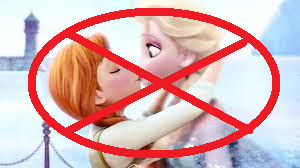 And you know the most disgusting thing about it all? As soon as you go on Tumblr, DeviantArt, Fanpop, and especially Fanfiction, almost ALL of the work on the Frozen sections are for this romantic pairings. Like over 80%.

It is just really mindblowing that incest is really being supported, and at the end of the day, that is EXACTLY what this shipping is doing. I get it that there are no homosexual relationships on Disney, and I feel you for that, but to turn sisters into lovers is taking it too far. And even if you separate that fact, their personalities really do not compliment one another romantically, but the fact is, YOU CANNOT SEPARATE THE FACT THAT THEY ARE SIBLINGS AND GREW UP TOGETHER.

So overall, this ship makes me nauseous, disturbed, groan, and also engage in the utter confusion that the internet continues to show me. I do not mean to disrespect the fans themselves, as I am not attacking you individuals, but I am expressing MY opinion on the matter. This pairing has almost no logic to me, and does not give me a good feeling at all.