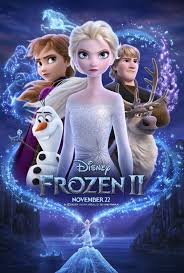 My opinion right after watching the movie

My opinion right after watching the film is that I am really tired of these sequels, especially all of the contrivances that are forced to make it into a reality. The movie still remains the slight charm that made the first one so endearing, but the characters and plot start to wear on my nerves. I like that there aren’t as many songs in the movie, which I do think is a strong suit, and makes the pacing better, which I had an issue with in the last movie. Overall, my thoughts on the franchise hasn’t really changed, and am still kind of ambivalent overall.

It is not shocking that with this movie being the first WDAS film to make a billion dollars, it’s no shock that it would get a sequel, despite an important motto for the studio was to not make sequels. When they were making the short film “Frozen Fever”, the crew realized that they missed the characters, so a sequel was quickly put into place. The ending was the first thing that the crew worked on, since they knew that they wanted Elsa and Anna to be separated from one another, and the rest of the story was built around that.

The movie starts with young Anna (Kristen Bell) and Elsa (Idina Menzel) being told a story by their father (Alfred Molina), about magic being united by fire, water, earth, and wind, where they spoke of the Northuldra people, who took advantage of the 4 forces. They were neighbors with the people of Arendelle, and when he was younger, he went to the village to celebrate the bridge that was being built to unite the two communities. What was supposed to be a celebration ended up turning into a war, his father ended up dying, and the spirits turned on Arendelle. A voice saved his life, and everyone was trapped out of the village for good. Anna and Elsa’s mother (Evan Rachel Wood) sung a song that was told to her about a river when she was younger, which carried a bunch of memories, and where people’s answers would be found.

We go to the present day, and Anna is singing about how change is happening around her, and how she will rely on the similarities to keep her going. Just like in Toy Story 4, and Ralph Breaks the Internet, it easily hints that something will be permanently changed by the end of the movie. Kristoff (Jonathan Groff) is preparing to propose to Anna, and it becomes clear that they’re going to drag this out for the entire film, in an annoying manner that is already irritating, and is not funny.

So Anna is lecturing Elsa about not telling her about everything, and Elsa admits to opening up the enchanted forest. Everyone in the kingdom has been evacuated, and Elsa decides to go to the Enchanted Forest to figure things out, and I’m already annoyed with how Anna and Kristoff, in addition to Olaf (Josh Gad) are responding/acting. As they make their journey, Kristoff tries a few attempts to propose to Anna in an irritating manner, Anna acts dumber than usual, and doesn’t treat him well, while being even clingier with Elsa. I mentioned earlier how they lacked chemistry, and it’s even worse in this film.

Olaf sings a horrible song about getting older, and they all end up in the village of Northuldra. It comes to realize that the people in the war were frozen in a warp, and both sides still assume that the other is wrong. Nature causes them to agree to help our main characters, whose goal is to free the forests, and to reunite with Arendelle. Kristoff runs off to prepare proposing to Anna and Elsa, but it causes them to accidentally leave him behind the next day, when they leave Northuldra.

We get a really cool sequence of Elsa trying to cross the waters, as she tumbles a few times, only to get into a fight with an ice horse, whom she ends up taming anyways. She makes it there, and sings about how she feels like she’s at home, which is really a continuation of “Into The Unknown”. It turns out that Elsa is the 5th spirit that connects Earth, Water, Wind, and Fire together (though it’s not really explained as to why), and she realizes that her grandfather was a colonizer who took advantage of Northulda, as he was trying to kill the leader. She also learns that her mother is from Northulda, which……. is weird, just based on how her mother is designed, and how literally all the other looks like.

This does add another element to the movie, and Disney usually moves away from this discussion. Even in Pocahontas, they blamed the conflict on BOTH sides, and that has not aged well at all, for correct reasons. While trying to see everything play out, Elsa starts to freeze to “death”, so she sends a message of their grandfather to Anna. It reaches her, and she sees Olaf start to disintegrate as well, causing Anna to also realize that her sister passed away too. Anna realizes that she needs to do the right thing, despite all of the sadness, so she realizes that waking up the large monsters to break the dam is the only way to make things right between the two communities. Elsa comes up alive, and manages to stop the entire thing, which I personally feel is a copout ending. Elsa then decides that she needs to live with the people of Northulda, Anna becomes Queen, and that despite them being apart, the two sisters will always be close.

I do not have much to say about the characters, though I think the development was weaker than I expected, and they came off as more one-dimensional to me. I think a part of it has to do with the dialogue not being as good to me, causing the characters to annoy me more. The new characters are extremely forgettable, and did not really add anything to the movie, so I don’t really see their purpose.

It is interesting to see the improved animation from the last 6 years, and the animation in the first film was great. The backgrounds are brilliant, darker contrast of the colours add to the scenery and emotion of the film, and everything about it is great. It looks a lot more distinct, and it’s just really amazing. The humans look a lot better, and that says a lot, since the CGI humans in these movies usually age horribly.

Nothing really to say about the music, since everyone knows that it’s good. I do find the songs to be not as memorable as the first one, but I liked all of Elsa’s songs. Kristoff’s song was pointless, but it’s a catchy enough 80s-like boyband song I guess. Overall, it does its job, but I don’t think it’s very memorable, and isn’t as strong in comparison to the first one.

From what I could gather about the film critically, most people agreed that it was weaker than the first film. Many people liked the darker elements of it more, and found the characters, story, and music to be captivating. It was interesting to see that it wasn’t nominated for Best Animated Film t the Oscars, despite it being seen by virtually everyone, and it barely won any awards. Is the sequelitis bug biting WDAS reputation-wise, like it did Pixar some years ago?

One thought on “Frozen 2 review”