My Opinion right after watching movie

My thoughts right after watching the movie is that it is better than the original in every single way. There is A LOT more story, the characters are more fleshed-out, it is more entertaining and funny, but a lot of it feels a bit contrived and rehashed. And from what I heard about the third film of the franchise, this could be the best one.

I could not find much about the production of the movie, but I tried as best as I can. So originally, the movie was to be called Madagascar 2: The Great Escape, but was changed later in production for unknown reasons. The crew actually did research for this movie and went to Africa to study the animals, land and such, and developed the story there.

They got Ben’s son and Jada’s daughter to record the lines of Alex and Gloria when they were children in the early scenes of the movie. This is the last film to feature Bernie Mack before his death in 2008. They announced Madagascar 3: Europe’s Most Wanted before this film WAS EVEN RELEASED.

So the film starts with a short prologue of Alekai (Ben Stiller) and his father Zuba (Bernie Mack) who is trying to teach him to fight, but he is too busy  dancing (I swear they train the animals at the zoo to dance). Anyways, Makumga (Alec Baldwin) comes to start a fight with Zuba and they get into it. Alex follows a rope and gets captured by poachers. Zuba shows up, but Alex who is in the box falls into the river and ends up at New York.

And Will.i.am is singing (Yes, they got him in charge of the soundtrack) The Travelling Song while this prologue is coming to an end, and they are still in Madagascar about to go home. WAIT! At the end of the first movie, they said that they were going to travel around before they go home and they completely ignore that. Oh, they are signing a bad version of I Like to Move it and it is 7 minutes in the movie. Julian (Sacha Baron Cohen) and Maurice (Cedric the Entertainer) join them for some weird reason, and they are leaving to go home ala…

So they are on the plane and we learn that Gloria (Jada Pickett Smith) wants a man and Melman (David Schwimmer) loves Gloria, though there is no indication in the first one that he had any feelings for her. So the plane crashes in Africa and there are some stupid filler dialogue between Alex and the penguins and the old woman from the first film (rehash much) before they find the reserve. His mom Florrie (Sherri Shepherd) realizes that Alex is their son and they have a moment. 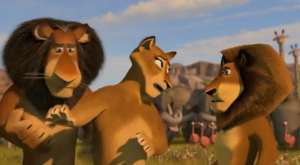 Soon, all 4 are actually given SOMETHING TO DO. Marty (Chris Rock) meets a bunch of zebras that are exactly like him, Melman becomes a doctor, Gloria gets a man in Moto Moto (will.i.am. I did not notice this before I looked in the credits), and Alex bonds with his family before Makunga tells them that Alex has to complete the coming of age ceremony or he will be banished. After the penguins steal everything the human tour group has, the old woman (Elisa Gabrielli) tells them that they are New Yorkers and survivors so they will use the land to benefit them.

So Alex gets beat up and fails the challenge, so his father had to banish him, but he refuses as in giving up his status, with Makunga taking over and banishing Alex and his family. Zuba is more than upset that Alex danced in the challenge instead of fought and says that he is not a real lion, causing Alex to storm off.

So they realize that the african life is to as fun as they thought as Melman gets a “disease” for having brown spots, and Marty is sick of being like everyone. Mel and Gloria get into an argument about Moto Moto, and Alex and Marty get into it over Alex being selfish and confusing him for another zebra. I do not care for the characters so this scene does not really do anything for me. Julian actually serves a purpose in the story and tells Melman to tell Gloria his love for her but he punks out and tells Moto that he has a great woman. Gloria finds out that Moto only lusts for her chunkiness. The next morning, the animals realize that the water is gone.

Alex decides to be hero and leaves the reserve to get the water. He finds Marty and their tiff is resolved. Julian actually does something and does a sacrifice to the gods so they will give them water and Melman offers it. So long story short, Melman and Gloria get together, and Alex and Marty find out that the humans took the waters (shocker) and gets it back. Melman realizes that he is not dying and Zuba understands Alex and his dancing. 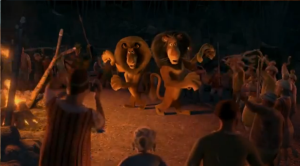 So the water came back, Makunga has the old lady’s bad and gets beat up by the old lady because of it. They all stay for a while while the penguins take off with the plane.

The animation is pretty much the same quality and style as Madagascar.

The music is done by Hans Zimmer and Will.i.am and it is not half bad. Sure a good amount of the time it is distracting, but it is memorable and somewhat moves the story along.

Critically, it received favourable reviews. People said that the characters are more fleshed out, a better story, and funnier gags, while others complained about it being a ripoff of The Lion King, but failing as it was still as flat as the original Madagascar. Some thought it was just mediocre.

From what I could find about the awards, it was snubbed by most, but it was competing with Kung Fu Panda, WALL-E and Bolt.  It won a Nickelodeon’s Kid Choice for Best Animated Feature, and nominated for a Broadcast Film Award. A spin-off series called The Penguins of Madagascar starting on November 29th 2008 and currently on their third season.

While it is seen as better as the original, it is easily forgettable amongst critics and fans, but it is shoved in out faces because it is a DreamWorks classic and a sequel that made a lot of money.